A favorite anecdote among historians who play the 'what if' game is the story of Annie Oakley and Kaiser Wilhelm. It is said that Annie performed a gun trick that involved shooting the lit end of a cigarette from the mouth of a male audience volunteer. The volunteer was a shill - her husband. But while on tour in Europe with Buffalo Bill's Wild West Show, Annie asked for a volunteer for the trick and got a real one: Prince Wilhelm of Germany. Though Annie had spent the night before in a beer garden, her aim was true and she performed the stunt without incident.

But, ask historians, what if she hadn't? What if she had shot the future Kaiser in the ear, killing him? If not for Kaiser Wilhelm we wouldn't have had World War One. Some say we are still battling the repercussions of that war: it spun itself out into the conflicts that engulf the middle east to this day. Iraq's invasion of Kuwait was, according to Iraq anyway, predicated on the fact that Kuwait should not have been partitioned by the British following the First World War. In more obvious examples, the First World War gave rise to the bitter German who eagerly embraced fascism. Without the kaiser there wouldn't have been Hitler. Without Hitler there wouldn't have been the millions of deaths at the hands of his reich.

What if George Bush took seriously a memo entitled 'bin Ladin Determined to Strike in the US'? What if he asked the question 'How would that be likely?' What if our intelligence and law enforcement agencies were tasked with estimating how that attack might happen? What if FBI agents in Minneapolis and Arizona and Florida were granted the search warrants they had requested just days after the August 6th PDB for suspicious foreigners taking lessons at local flight schools? What if the president, upon reading the PDB, reached out to the Hart Rudman commission and implemented its recommendations, rather than the path he chose, which was to reject Hart Rudman and turn the issue of terrorism over to the vice president who did nothing but hand the issue over to FEMA.

Would the towers still stand?

If that memo had been taken seriously, if the president acted with the same determined haste he managed to show for Terri Schiavo's parents, how different would our lives be today?

One afternoon. One piece of paper. One choice. 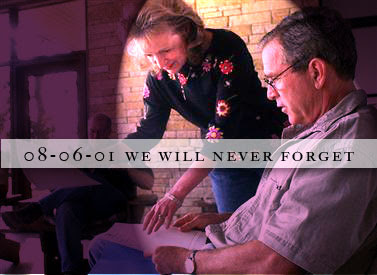 Thanks to tengrain for the picture and the inspiration for this blogswarm.

jess- this is so great!

Excellent while being a tad "spooky."

I often wonder what if, but even farther back than 8/6/01: what if GW--sitting on that barstool in an Austin bar, drunk, most likely higher than a kite on cocaine he and his lawyer buddies snorted in the bathroom--had fallen over dead? What if, as I lived in Austin back then, I had "helped" him fall over dead?

What I wouldn't give for a time machine and a poison pellet.

Why, I'd Love a Time-Out

All by myself in the corner
for 15 minutes?
Thankyou!

Where Do I Find These Blogs?

What Am I Doing Here?

Jess Wundrun
I am going to try to be positive like our new President-Elect Obama. But I have this whole box full o' snark and I'm afraid I'm going to have to use it. Sorry, President O. In your second administration I'll play nice, 'kay?

Which one of you neocons wants to be the first to kiss my ass?

Look a that, whodathunk hey?